Malaysia is quickly becoming a hotspot for plant-based food as it catches up with neighboring Singapore and Hong Kong, both known for their thriving vegan scenes.

Supermarkets across the country are now selling more plant-based products, restaurants are catering to surging demand by adding meat-free options to their menus and international brands are importing meat alternatives to the country.

“Plant-based protein is not entirely new in Malaysia as soy and tofu have been traditional staples,” Paul Sanda, senior trade and investment commissioner for Malaysia & Brunei at the Australian Trade & Investment Commission, told Salaam Gateway. “Vegetarianism is significant in two of Malaysia’s major religions (Buddhism and Hinduism) which might be a contributing factor [to the increasing demand for plant-based food],” he added.

Earlier this year, KFC Malaysia launched its Zero-Chicken Burger, a halal-certified meat-free patty created in collaboration with meat substitute brand Quorn. But many consumers were disappointed after learning that the new patty was neither vegan nor vegetarian. Singapore’s Today Online later reported that the patty was fried in the same oil as chicken products and the mayonnaise was not vegan. Shortly after, the chicken-less burger was discontinued.

The disappointment around KFC’s Zero-Chicken Burger on social media indicated a pent-up demand for plant-based meat alternatives. One of the first companies to cater to this demand was Green Monday’s OmniFoods.

The Hong Kong-based social enterprise launched its plant-based range in Malaysia in August 2020 and renamed it from OmniPork to OmniMeat to cater to consumers in the Muslim-majority country. The halal certified range, which includes all-purpose plant-based meat and luncheon, is now available in prominent supermarkets and restaurants across Malaysia.

“It is delightful to see when you walk into local supermarkets various plant-based meat options in the traditional meat freezer, instead of finding them in separate vegetarian sections. The market segment is growing, and we believe it will continue to grow,” he said.

More recently, in September 2021, Singapore’s Next Gen Food brought its TiNDLE plant-based chicken to Malaysia after launching in its hometown, followed by Hong Kong, Macau, and the UAE. The product is available in 11 restaurants across Kuala Lumpur and is being distributed in the city by Classic Fine Foods.

Marc Jolly, growth director for TiNDLE in APAC & Middle East, said that Asia has one of the widest adoptions of meat-free options in the world, mainly due to religion or affordability, with products that were not necessarily appealing to meat-eaters.

“Similar to other Asian countries, we see that Malaysia’s plant-based market is on an upward trajectory with more plant-based brands entering the country. With Malaysians being such foodies, we see that there is an openness and willingness to try new products, particularly in the plant-based world,” Jolly told Salaam Gateway.

A survey of 4,600 people across Malaysia conducted by data powerhouse Statista in 2019, found that most respondents had tried plant-based milk, and half had tried non-dairy cheese, meat substitutes, and plant-based desserts, indicating consumer readiness to try new and novel food products.

“Local food service tie-ins with plant-based protein manufacturers are driving the wider consumption pattern and introducing local consumers to the products as part of their diet. Some key collaborations include Kyochon and Harvest Gourmet (Nestlé), KFC and Quorn, La Juiceria and Beyond Meat,” said Sanda.

Nestlé opened its first plant-based meals manufacturing facility in ASEAN in Malaysia last April with an investment of RM 150 million ($36 million). With this facility, the Swiss food giant plans to capture the growth opportunity for plant-based products in the region, according to Chris Johnson, executive vice president and CEO for Asia, Oceania & sub-Saharan Africa at Nestle. The new facility has already started producing the Harvest Gourmet halal-certified plant-based range, which includes schnitzel, chargrilled pieces, and ground mince products.

Even IKEA Malaysia rolled out a plant-based menu last month at all its restaurants in the country, offering schnitzel, fishless fingers, and vegetable ball wraps. In addition, most major supermarkets and ecommerce platforms in Malaysia are selling plant-based food, including Lazada, Shopee, GrabFood and FoodPanda.

There are also a handful of plant-based grocers around the capital. One of them is Vegan District, which took its chances when it opened in July 2019. It was the first fully vegan grocer in Malaysia and the vegan community was still small. Today the store offers one of the largest selections of plant-based foods and has started to deliver through its online shop. Among the alternative meat brands that it stocks are OmniMeat, BeyondMeat, and Deliciou as well as local brands such as Phuture.

Kuala Lumpur-based food tech Phuture was founded by CEO Jack Yap in 2018 and makes plant-based burger patties and mince “that can be cooked in any way” including pan-frying, grilling, or oven-baking. The company grew rapidly and now supplies its products to Thailand and Singapore.

Another local food tech startup that has seen success with its plant-based products is Ira Noah. Established in 2013 by husband-and-wife duo Ahmad Syafik Jaafar and Amirah Mohd Noh, the company started with the Nanka flexitarian patties, a combination of 70% jackfruit with 30% either chicken or beef. But it wasn’t until they launched the Nanka 100% plant-based patty last September that they started seeing a faster movement of stocks. The new patty is made from 70% jackfruit and 30% oyster mushrooms.

The company wasn’t sure about the market response at first. But the fact that a few companies came in to promote their plant-based products in Malaysia at the same time helped set the stage for Nanka and create awareness.

“We’re riding on that momentum, so I think we were lucky in that sense. We’ve been seeing a good 4-5% month-to-month growth. Right now, as it stands, we’re doubling sales that we’ve gotten last year, so we’ve seen a lot of traction,” Jaafar told Salaam Gateway.

Ira Noah is now preparing to launch small patties for children between the ages of two and five, as well as frozen meat cubes that Malaysians and Indians could add to their favourite traditional dishes. The startup also plans to turn its proprietary jackfruit mince to other products such as nuggets, sausages, kebabs, and fillings for delicacies.

Given Malaysia’s tropical environment, Ira Noah is exploring the use of locally sourced plant-based proteins like micro algae and stink bean. At the same time, it is looking at expanding to regional markets like Indonesia and Thailand and further out to Australia and the Middle East.

A stamp of quality

Almost all plant-based protein manufacturers supplying the Malaysian market are choosing to get halal certification as a way to gain Muslim consumer confidence.

TiNDLE, for example, has been certified by the Halal Feed and Food Inspection Authority (HFFIA) in the Netherlands for both the product and the factory. OmniMeat is halal certified by the Central Islamic Committee of Thailand (CICOT), which is recognized by the Malaysian Islamic Development Department (JAKIM), while Phuture and Nanka’s plant-based products and manufacturing facilities have been certified halal by JAKIM.

“Even though we don’t have meat content in our 100% plant-based patties, we still have the halal certification to show to our customers, as a stamp of quality and ethical practices in the business. Halal is now also about being tayyiban, meaning good for you,” said Jaafar. This added assurance is important as many meat substitutes today are heavily processed and contain long lists of complex ingredients.

Nanka’s producers tried to avoid soy when developing the plant-based meat and instead used jackfruit mince, along with potato flour, shortening, textured vegetable protein, and spices.

“Eighty percent of soy that is sold in the market is genetically modified. Soy is also known to contain naturally recurring hormones called phytoestrogens, so if you consume a bit more soy than everyone else, you tend to have disruptions in your body,” said Jaafar.

TiNDLE also kept it simple with its plant-based chicken, using only nine ingredients. While it uses soy for the protein, the company claims the product does not contain any antibiotics, hormones, or genetically modified ingredients.

As for OmniMeat, the products are made with “all-natural ingredients” including peas, non-GMO soy, shiitake mushroom, rice, and beetroot juice extract for the reddish colour.

“Innovative solutions are meant to give people a healthier, cleaner choice, instead of confusing them. We upheld our principle from day one to use natural ingredients in our products,” said Yeung. 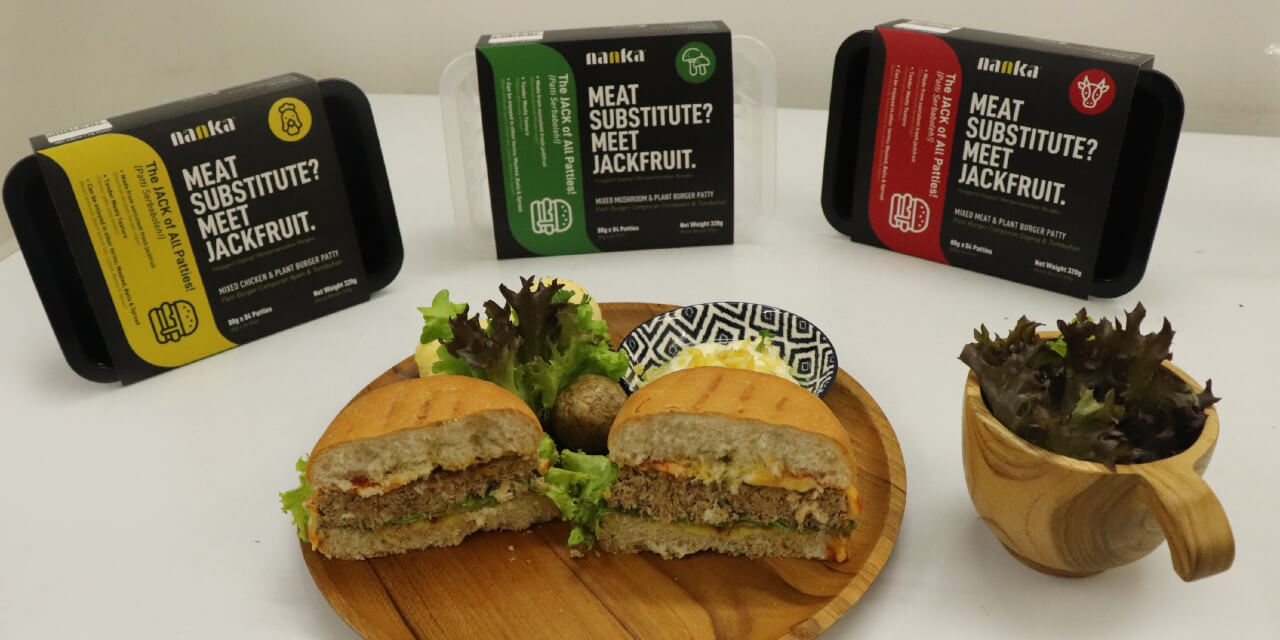 Malaysia’s growing plant-based food market attracts global brands and local startups
Malaysia is quickly becoming a hotspot for plant-based food as it catches up with neighboring Singapore and Hong Kong, both known for their thriving vegan scenes. Supermarkets across&nb..
https://css.salaamgateway.com/story/malaysias-growing-plant-based-food-market-attracts-global-brands-and-local-startups